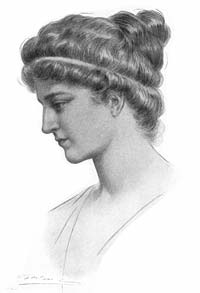 The Virgin's starry sign when e'er I see,
Adoring, on thy words I think of thee:
For all the virtuous works celestial are,
As are they learned words beyond compare,
Divine Hypatia, who didst far and near
Virtue's and learning's star appear.
~ Anon (Anthol. Grace. Palat. Ix, 400) Trans John Toland, Hypatia London 1953 p.21.

No works are recorded of Hypatia of Alexandria, no picture exists, even the year of her birth is not remembered. She came to be damned as a witch by the Christian church, probably because they did not like the high social status she enjoyed in Alexandria. Damascius in his life of Isidore recalled:

The woman used to put on her philosopher's cloak and walk through the middle of town and publicly interpret Plato, Aristotle, or the works of any other philosopher to those who wished to hear her. In addition to her expertise in teaching she rose to the pinnacle of civic virtue. She was both just and chaste and remained always a virgin. She was so beautiful and shapely that one of her students fell in love with her...1

And Socrates Scholasticus, from his Ecclesiastical History AD 450 averred:

THERE WAS a woman at Alexandria named Hypatia, daughter of the philosopher Theon, who made such attainments in literature and science, as to far surpass all the philosophers of her own time. Having succeeded to the school of Plato and Plotinus, she explained the principles of philosophy to her auditors, many of whom came from a distance to receive her instructions.

Her year of birth is uncertain but she gathered her philosophy circle around her in the late 380s, then she died in 414. It was a turbulent period with the library of Alexandria destroyed in 389, the Serapeum (huge ancient pagan temple in Alexandria) destroyed in 391, the official closing of the pagan temples in 392 by Roman emperor Theodosius, who then in 385 supported the Catholic church; the sacking of Rome in 410, and St Augustine becoming the Bishop of Hippo (in Africa, further South than Alexandria) in 412.

She may not have been a salaried director of a philosophy school, but eminent people of the city came to listen to her: "everyone who wanted to study philosophy flocked to her from all directions" (Socrates Scholasticus2) She wrote on mathematics, astronomy3 and philosophy, including about the motions of the planets, about number theory4 and about conic sections. "...it was wonderful how in the lecture halls of Hypatia – for such was the name of this reincarnated Orphic pupil – the purest, most luminous wisdom in Alexandria was presented to the enraptured listeners." (Rudolf Steiner, Occult History, London 1957 p.21) 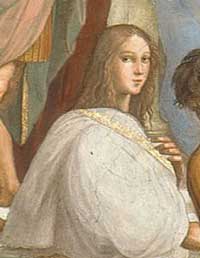 The word Theoria kind of meant enraptured contemplation, from Theos a god, and it meant perception of divine principles, but its modern version "theory" has rather lost all of that. It was a neo-platonic concept of experience. Synesius of Cyrene, who was to become a wealthy and powerful Bishop, in a letter to an old schoolmate wrote of Hypatia, "You and I, we ourselves both saw and heard the true and real teacher of the mysteries of philosophy." He wrote to another fellow student and close friend Herculian, “we who experienced the most wonderful things together we would not have believed the accounts of such things, had we merely heard about them, but we have seen with our own eyes and listened with our own ears to the woman who rightly holds the mastery over the mysteries of philosophy. (Synesius, Letter 137). His Epistle 93 alluded to Hypatia's classes in "divine geometry."

She had a circle that met daily, and what did they experience? She taught four subjects: ontology, ethics, astronomy and mathematics. Her Father Theon may have been more into magic and omens than she was, writing poems on astrological themes, how the "germs of the inflexible resolutions of Destiny" are embedded in the seven planetary spheres, about the distinction between heaven and nature, and how "splinters of a higher, divine substance reside in our hearts and minds; they can be activated through effort and will."5 Hypatia was a bit more austerely philosophical, but it was an inner journey on which her pupils were taken: the "eye buried within us" had to be found and developed, that "intellectual eye," that "luminous child of reason" whereby some sort of transcendental experience is reached.

Christians and pagans gathered together in Hypatia's circle. She was not seen in any of the sites of battle between pagans and Christians. She was a Hellenic, but was not attracted to Greek polytheism. She did not participate in pagan cult practices. Texts used in her circle would have included the Chaldean Oracles as well as other Hermetic texts of "Egyptian/Greek religious, apocalyptic, demonologic literature" (Dzielska p.63). Her lectures were conducted in the form of dialogues on ethical and religious topics. Her students came from the social elite, they were wealthy.

Synesius alluded to her teaching as a "fruitful wisdom": "Today Egypt has received and cherishes the fruitful wisdom of Hypatia,"6 contrasting this with the city of Athens he had recently visited, where he found that philosophy had long been extinct.

In Synesius' Epistle 124, written from his home town Cyrenia in Libya, he wrote: "Even in Hades will I remember you, dear Hypatia."7 He will remember his philosophy teacher even after death!

Her Father Theon was the last director of the famed Museion of Alexandria (NB, "museum" then had the meaning of contacting the Muse, not the storage of things in a room). He wrote an astrolabe treatise that was the basis for much of what was written later in the Middle Ages. Hypatia did teach about astrolabes and presumably had one: her best-known pupil Synesius had an astrolabe made.

Synesius goes into some detail about this instrument, which he is sending as a present to his friend Count Paeonus in Constantinople, because: "Astronomy itself is venerable science, and might become a stepping-stone to something more august, a science which I think is a convenient passage to mystic theology...." explaining that Astronomy "proceeds to demonstrations in no uncertain way, for it uses as its servants geometry and arithmetic...", here alluding to the spherical trigonometry required for his astrolabe. He is sending this gift, it being "a work of my own devising, including all that she, my most reverend teacher, helped to contribute..." and it was made by the best silversmith he could find. The Count Paeonius received a silver astrolable from Libya! 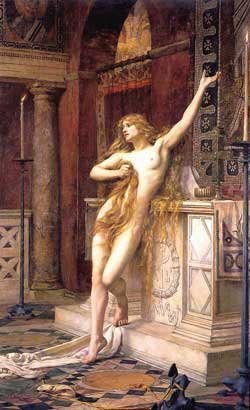 The math, Synesius explained, was first outlined by Hipparchus: "The representation of a spherical surface, maintaining identity of doctrine amidst different figures, Hipparchus of old vaguely shadowed..." But "we .. have perfected it. The problem had been neglected in the long intervening time." For such "perfecting" of spherical trigonometry, he has to be alluding to the work of Theon of Alexandria, Hypatia's father. His astrolabe showed, Synesius explained, "the places of the stars, not their positions in respect of the zodiac, but in respect of the equator," alluding to a lost work of his on the subject. A poem of his inscribed upon it alluded to the astronomy he learnt from Hypatia:

It has also ordered the curved form of the globe,
And it has cut the equal circles with unequal spacings.
See the constellations all the way to the rim whereon the Titan,
Holding his kingdom, metes out day and night.

Nowadays, the feminist journal "Hypatia" has its themes of women's rights, lesbianism etc showing no trace of interest in what Hypatia taught or what she stood for. It may be time to try and seek the real character who so inspired her contemporaries – deeply obliterated though her memory has been with the advent of an age foreign to philosophy. She stood for a multicultural tolerance whereby Christian and pagan themes could both be respected; and her best-known pupil Synesius of Cyrene put that into practice when made Bishop: he integrated Neo-Platonic and Christian themes in a way that no other Bishop ever quite managed.

She was torn to pieces by the parabolans, a strong-arm cadre supporting Cyril the Patriarch of Alexandria, who was appointed to that role in 412. The parabolans were supposed to collect the ill and homeless and put them in almshouses, but they also served as a military arm of the patriarch, eg when attacking pagan temples and driving out the Jews; it was they who put about the worst falsehoods concerning sorcery by Hypatia. Cyril grew jealous over her having more influence than he ever did, among the elite of Alexandria. He, who became St Cyril, cannot be absolved of guilt over that never-punished deed.8

With her terrible death there began the Dark Ages, ending seven centuries of philosophy in Alexandria.

1 Damascius's Life of Isidore, reproduced in The Suda Translated by Jeremiah Reedy.

2 He was a 5th century church historian; quoted in Maria Dzielska, Hypatia of Alexandria, translated from the Polish by F.Lyra, HUP 1995, p.44.

3 She may have prepared a new edition of Ptolemy's Handy Tables, as well as helping her father Theon with his commentaries on Ptolemy's Almagest.

5 From two poems by Theon, in Greek Anthology: Dzielska, p.75.

8 But, NB, Ki Longfellow, in her acclaimed novel Flow Down Like Silver, Hypatia of Alexandria does not accuse Cyril of having ordered the deed.