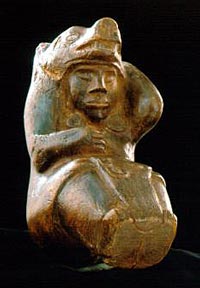 This article is based on material submitted as a dissertation to the University of Wales, Trinity St. David's in 2013 for an MA in Cultural Astronomy and Astrology.

In the 19th century, the Smithsonian Institution identified more than 100,000 mounds and earthwork sites across the United States. The largest concentration of these was found in Ohio, along the banks of major rivers such as the Licking and Scioto. By July 2004, the Ohio Historic Preservation Office had documented 34,972 prehistoric sites. The number of Ohio mounds and earthwork sites has led to considerable interest as to who built them, for what purpose, and why so much time and effort was invested in their construction.

Many of the Ohio mounds and earthworks can be attributed to one Native American culture -the Hopewell culture of the Middle Woodland Period. Mordecai Hopewell was the name of a Confederate veteran who owned the farm where a large and representative group of mounds and earthworks were found and this became the type site for the Hopewell culture. "Hopewell" is not then the name of a specific Native American group, but an archaeological definition based on similarities in artifacts and architecture. The time span of the Hopewell culture fell between the Adena culture of the Early Woodland Period (800 BCE - 100 BCE) and the Late Woodland Period (400 CE – 900 CE). To place the Hopewell period within a global context, the peak of the Hopewell period was the first century CE. Elsewhere in the world, the Acropolis was being built in Greece, the Temple of Edfu in Egypt, the Great Wall of China and, in Rome, buildings such as the Colosseum and the Pantheon. On the North American continent, the Hopewell period heralded a time of rapid earthwork and mound construction.

One advantage of having such a large number of Ohio Hopewell culture sites is that it is possible to identify two distinct and relatively consistent features which occur among them. The first is the number of artifacts which have been found at the sites themselves. The Hopewell Culture National Historic Park in Chillicothe, Ohio, contains just five sets of earthworks but over 148,000 artifacts have been discovered there. These include a wide range of ornately carved ornaments from non-local raw materials such as mica, copper, pipestone, silver, marine shells and obsidian. In other world cultures, such reflective materials were used to represent shamanic activity. This leads to opinion that the Ohio sites were used for religious or ceremonial purposes. A specific example is the Wray Figurine (top of this article), discovered in 1881, at the site of the Newark Earthworks. This carved figurine depicts a shaman dressed in a bear cloak with a human head resting on its lap. Bradley Lepper, Curator of Archaeology at the Ohio Historical Museum where the figurine resides, suggests an interpretation of a shaman transforming from human to bear spirit, as the paw on the side of the head allows the shaman to lower the mask to complete the transformation. 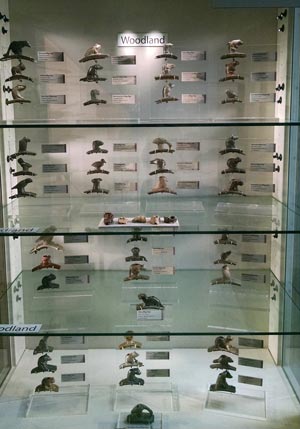 An example of a group of buried artifacts was excavated at the Mound City and Tremper earthwork sites. A bundle of 200 effigy pipes were found, each ritualistically 'killed' or destroyed. The effigy pipes feature 29 species of animals and birds and were likely carved by a small group of artists. The creatures on the pipes face the smoker suggesting that animal communion was an important theme in the Hopewell culture. The idea of ritualistic "killing" and then burying large numbers of artifacts is also a feature of artifacts found at other Ohio earthwork sites. One origin for this ritualistic form of burial may lie in the idea of reciprocity, an element of some other Native American cultures. Whenever something is taken, something must replace it, whether at the individual or community level. 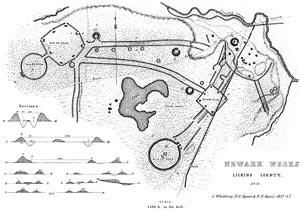 The second distinguishing feature of the Ohio earthworks and mounds is their size and complexity. For example, Newark Earthworks, the largest earthwork site is located close to Columbus, Ohio. It covers an area of over four square miles and consists of a variety of accurately constructed circles, squares, lines and mounds. The 18th century survey of the Newark Earthworks, published in Ancient Monuments of the Mississippi by Ephraim Squier and Edwin Davis in 1848, and shown below, shows the complexity of the Newark site. As an indication of size, the circle linked by a pathway to an octagon highlighted in the top left hand side of the map is large enough to house the current Moundbuilders Golf and Country Club. 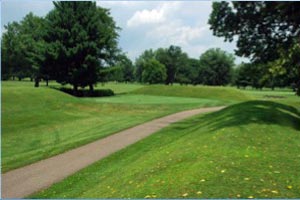 The circle-linked-to-an-octagon at the Mound builders Golf and Country Club is also an indication of the precise geometry used in Hopewell earthwork construction. This particular configuration was mathematically constructed using a uniform measurement of 1054 feet. 1054 feet is the diameter of the circle as well as the side of the squares around which the octagon was formed. The same measurement of 1054 feet is repeated within the Newark Earthworks site itself and in at least 23 other nearby Ohio earthwork sites.

This example of dimensional transfer parallels those found at prehistoric sites in other parts of the world - for example, at the Mayan site, Uaxactun, in the Yucatan peninsula.

Since the early 19th century, there has been archaeological excavations of the Ohio earthworks and mounds. A more recent development in the purpose of the Ohio earthwork sites is now being explored through the field of archaeoastronomy. The focus of archaeoastronomy is to consider the role that astronomical phenomena have played in human societies. Nicholas Campion asserts that every human society relates its fears and wishes in some way to the sky and to the organizing principle behind it, the cosmos. 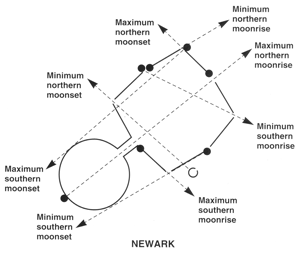 Since 1982, archaeoastronomers Ray Hively and Robert Horn have undertaken research on the Newark Earthworks and High Bank Earthworks in Ohio. Their initial research set out to investigate whether the unique geometrical measurement of a circle-linked-to-an-octagon present at both sites, was oriented to the location of lunar rising and setting on the horizon. In other words, were the earthworks designed to mark times of lunar standstills?

Maximum lunar standstills occur every 18.6 years. This 18.6 year period or 'nodal cycle' corresponds to the precession of the moon's orbit due to the effects of the sun's gravity. At lunar standstills (which last for around three weeks) the moon rises and sets on the horizon outside the extremes of the sun. These times may have been observed by prehistoric inhabitants. Roughly every 9.3 years, there is also a minimum lunar standstill where the moon experiences its minimum range of southern and northerly rising and setting positions on the horizon, but this is more difficult to detect visibly. Using seven different vantage horizon points on the Newark octagon and circle, Hively and Horn have strived to find a possible line-up between the Newark Moundbuilders circle and octagon configuration with maximum and minimum lunar standstill points.

Although they have brought considerable statistical rigour to their analysis of lunar standstills, so far the outcome of Hively and Horn's work remains inconclusive. While they have demonstrated that it is statistically unlikely that the earthworks line up with lunar standstills by chance, it is not possible to state that the Hopewell actually built it for that purpose. This presents an important and tantalizing issue in assessing any past culture for their links to the sky; just because something lines up with an astronomical phenomenon, does this necessarily constitute proof that it was the intention of the original builders?

The building of earthwork sites and mounds and the ritualistic burial of artifacts at the Ohio earthwork sites leads to the subject of religion. Mircea Eliade maintains that the distinction between the sacred and the profane is one that has always been there. In traditional societies, religious and cosmological images can be combined into a 'system of the world', and sacred space makes possible communication and passage from one cosmic region to other – from heaven to earth and from earth to the underworld. A noticeable feature of the Ohio landscape is flat open expanses of land with small rolling hills. Earthwork sites appear to mirror this topography. The attempt to build constructions which mirror local scenery is again addressed by Eliade who suggests that mountains are the nearest thing to sky and can indicate the meeting place of heaven and earth. He puts forward the essence of metaphor which allows for the mapping from one familiar domain onto another unfamiliar domain.

This article set out to address 3 questions – who built the Ohio earthworks and mounds, for what purpose and why so much time and effort was invested in their construction. The first two questions have been answered - the Hopewell culture built the earthwork sites and the large number of artifacts and geometrically constructed earthworks left behind offers archaeological evidence that the earthworks and mounds were used primarily for ceremony and shamanistic purposes.

The final question as to why so much time and effort was invested in earthwork construction during this particular short 500 year period (100 BCE – 400CE) still remains unanswered. Archaeoastronomers Hively and Horn's research in potentially linking the earthworks to the sky is a significant step forward, but the modification of the Ohio landscape on such a scale and its potential link to the cosmos will require further investigation. 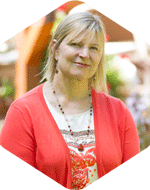 Originally from Great Britain, Janet emigrated to Canada after obtaining a B. Sc. Hons mathematics degree from Southampton University. In 2013, she was awarded an MA in Cultural Astronomy and Astrology from the University of Wales, Trinity Saint David. Her article on our website, The Sacred Landscape of Ancient Ohio, is based on her dissertation. Having taught classes since 1990, she is one of the original members of the Canadian Association for Astrological Education (CAAE), serving as President from 2004 to 2010, and holds a Diploma CAAE. Janet is primarily involved in promoting astrology and aromatherapy within Canada and continues to be involved with Astrology Toronto and CAAE, as well as organising international astrological speakers to speak in Canada.

Aveni, Anthony, People and the Sky,New York: Thames and Hudson, 2008.

Chapman, Robert. "A view from beyond the Periphery". In Recreating Hopewell, edited by Douglas Charles and Jane Buikstra, 510-528. Florida: University Press of Florida, 2006.

Magoo, Don, Mounds for the Dead, Pittsburgh: The Carnegie Museum of Natural History, 1989.