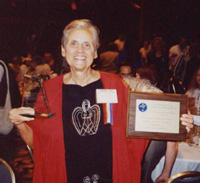 Zipporah Dobyns was a popular writer on astrology, astrological counsellor and researcher into asteroids. Zip (as she was known in the astrological community) began to study astrology in 1956 and in 1960 was the third candidate to qualify as a professional astrologer PMAFA with the AFA. Her professional skills were rewarded by the 1992 Regulus Award for education and again in 1995 a second Regulus Award for discovery and innovation.

Her special interest in asteroids inspired the publication in 1977 of an ephemeris for the first 4 asteroids by her son Mark Pottenger at a time when desktop PCs were not yet available to many.

From her initial degree course in anthropology (1944) Zip combined her astrological work with a study of clinical psychology, leading to her PhD in Clinical Psychology from the University of Arizona in 1969. Earlier in 1965 she had also been ordained a minister in her church and together these studies combined in her professional work as an astrologer, counsellor, teacher and writer. For more than 3 decades she was a familiar speaker at astrological conferences – lecturing in over 16 countries as well as across the USA.

Zip died on 7th June 2003 at her home in California. Many of her books are in print and still widely read.

Planets on the Move: The Astrology of Relocating

The Astrologer's Casebook (with Nancy Roof)

Finding the Person in the Horoscope

The Zodiac as the Key to History