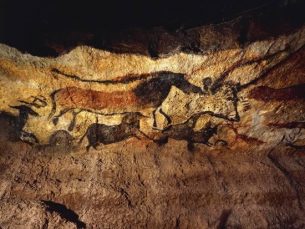 Researchers demonstrate that ancient stargazers had sophisticated knowledge of astronomy

Historians generally agree that astrology’s ancient roots date back at least 4,000 years to ancient Mesopotamia and Egypt, but accumulating evidence suggests that mankind’s fascination with the night sky goes back much farther than that.

A new study described in the EarthSky.org news magazine reports that 40,000 years ago cave-dwellers in what are now Turkey, Spain, France and Germany all used a method of date keeping based on the stars. Some of their cave paintings aren’t just depictions of wild animals but instead represent constellations in the night sky, according to researchers Martin Sweatman and Alistair Coombs from the Universities of Edinburg and Kent, respectively.

Some of the world’s oldest cave paintings reveal that ancient people had surprisingly advanced knowledge of astronomy. According to the authors, the animal symbols drawn on cave walls represent star constellations in the night sky and were used to represent dates and to mark events, such as comet strikes. The research specifically checked out Earth’s catastrophic encounters with the Tourid meteor stream and the cave art created to memorialize known catastrophes.

The researchers studied and compared details of Paleolithic and Neolithic cave art featuring animal symbols and found all the sites used the same method of date-keeping based on sophisticated astronomy, even though the cave art samples compared were separated in time by thousands of years. The team confirmed their findings by comparing the age of cave art examples (determined by radiocarbon dating of the paints used) with the positions of stars in ancient times. A sophisticated computer software programs positioned stars and planets in their respective time periods.

In an article published in the in the November 2018 issue of the Athens Journal of History, the researchers explained that the cave paintings show that as far back as 40,000 years ago humans kept track of time using sophisticated astronomical knowledge regarding how the positions of stars slowly change over thousands of years. Remarkably, they found that ancient people understood the phenomenon known as precession of the equinoxes, an astronomical effect created by the gradual wobble of the Earth as it rotates on its axis like a spinning top.

The equinoxes inch through space in a westerly direction along the ecliptic or plane of the Earth’s orbit. advancing one degree every 72 years. At this pace it takes 25,772 years to complete a full cycle through the 12 signs of the astrological zodiac.

“This knowledge, it seems, enabled ancient people to record dates using animal symbols to represent star constellations, in terms of precession of the equinoxes. Conventionally, Hipparchus of ancient Greece is credited with discovering this astronomical phenomenon. But we show that this level of astronomical sophistication was known already within the last ice age, and very likely by the time Homo sapiens entered western Europe around 40,000 years ago,” Sweatman said.

He says his team’s measurements for precession of the equinoxes were made using Stellarium software to accurately predict the positions of stars and their constellations in earlier epochs. These measurements were compared with the calibrated radiocarbon measurements that dated the age of the European cave art in the Paleolithic and Neolithic periods, which spanned thousands of years.

“Through this comparison of predicted and measured dates we were able to verify our scientific hypothesis to an extraordinary level of statistical confidence, far surpassing the usual demands for publication of scientific results. Early cave art shows that people had advanced knowledge of the night sky within the last ice age. Intellectually, they were hardly any different to us today.

What isn’t so clear is how this information ultimately fits with modern preconceptions about the way our ancient ancestors imagined and embraced reality. The tendency has been for moderns to write off ancient stargazers and their modern counterparts as a fearful, superstitious lot that threatens intellectual stability. Conceivably, this head buried in sand approach to human history will be modestly shaken by Professor Sweatman’s revelations.

Sweatman and Coombs article, Decoding European Palaeolithic Art: Extremely Ancient knowledge of Precession of the Equinoxes can be found here.