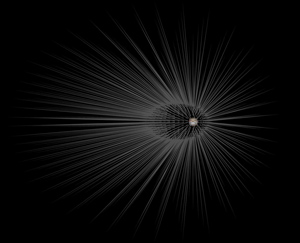 Dark Matter Gravitationally Focused by the Planets May Be Illusive ‘Mechanism’

Massive amounts of mysterious dark matter gravitationally focused by the planets may be the illusive “mechanism” that explains how astrology works in the natural world.

Critics argue that astrology can’t be real because there is no known mechanism in physics to explain planetary influence at astronomical distances. Sagan, one of astrology’s staunches critics in the last century, summed up his thinking on the matter in this way:

“Mars is a lot more massive, but the obstetrician was much closer.”

A Daily Grail article republished on the Canaveral Research website suggests another possibility. In an important breakthrough, CERN researchers discovered a correlation and possible cause and effect between otherwise invisible dark matter particles and melanoma, a type of skin cancer.

In a groundbreaking study CERN researchers found streaming invisible matter gravitationally focused by the planets to be the cause of persisting anomalies of solar activity (solar flares) and ionization of the Earth’s ionosphere. This result was unexpected because conventional scientific wisdom has persistently sided with Sagan and his idea that earth’s distant planetary neighbors are too far away to physically influence affairs on Earth.

Researchers Konstantin Zioutas and Edward Valachovic took things to the next level by testing whether the invisible streaming matter might also have an effect on humans. Their idea was to test whether planetary correlations also exist in medical data, starting with an analysis of detailed statistical sets that recorded the appearance rate of melanoma, a type of skin cancer.

Canaveral Research Director Courtney Roberts says the researchers analyzed monthly melanoma rates in the US between 1973 and 2011 and observed a statistical planetary relationship well above 5 sigmas. Said another way, there was only a one in 3.5 million probability that the result observed was random or coincidental.

Incredibly, after being shoved from the table centuries ago, the earthly impact of orbiting planets was once again being seriously considered by mainstream science. Roberts thinks this extraordinary development potentially opens the door to additional research in the interdisciplinary fields of physics and medicine.

Mysterious dark matter was first described by Swiss astronomer Fritz Zwicky in 1933. Succinctly, dark matter is a hypothetical form of matter that is believed to be composed of some as yet undiscovered subatomic particles. Its presence is implied in a variety of astrophysical observations, including gravitational effects that cannot be explained unless more matter is present in the universe than humans can see.

Dark matter is thought to account for approximately 85 percent of all the matter in the universe and about a quarter of its total energy density. What’s bothersome about this revelation is it means that all of the galaxies, black holes, stars and planets in creation account for a relative small percentage of everything there is. Ergo, all of the laws of nature we know about and count on are fundamentally based on the 15 percent of existence scientists can actually see and measure.

In the current century, scientists are struggling to explain the results of studies that inexplicably link seasons or birth months with specific illnesses, personality traits, psychological impairments and the like. For example, statistical studies have revealed that schizophrenics are more likely than others to have February birthdays. Or summer-born males are more conscientious than their winter-born counterparts.

If you’re thinking all this sounds suspiciously like astrology in action you’re right; it probably does. Only on the science side, astrological nuance isn’t considered openly, at least not yet. It may take a while for streaming invisible matter focused by the planets to emerge as a plausible explanation for some of the mysteries that continue to baffle contemporary searchers.

There’s much to be done. Roberts believes promising interdisciplinary evidence-based research will continue to challenge the curious. She says Canaveral Research will be there helping astrologers hold up their end.

Canaveral Research is organizer of the annual Kepler Conference for astrological research and also offers memberships and online educational programs. More information can be found at the Kepler Conference website, http://canaveralresearchcenter.com.