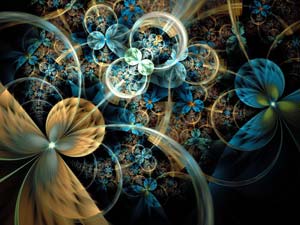 This universe of ours, what is it really?

Here we are, centers of consciousness, surrounded by a buzzing confusion which we must try to understand. But we are the selfsame stuff of the universe – perhaps ultimately a cloud of energy interacting with other clouds of energy – and in that account we are in the role more of participants than observers.

We cannot distance ourselves from our ambient, hold it at arm's length for impartial scrutiny. This fact has been heavily underlined by modern physics, since it sets limits to our knowledge. What we experience is not external reality per se but our interaction with it, so that in a very real sense we are constructing our universe from out of ourselves, changing what is in the very act of observing it. It has been said that if our sensory apparatus could be taken away, and different organs substituted, we should think we were living on a different planet! Even to experience the world for five minutes through the senses of an earthworm, an eagle, a cow or a bat would be a revelation.

In this situation we cannot pretend to know absolutes; we cannot be sure the divisions we make up in this essentially undivided whole, in which we ourselves are embedded, are the only ones available to us, or the most fruitful. Nor do our sophisticated measuring instruments, being essentially extensions of ourselves, offer any guarantees.

We are accustomed to break down our world, in order to understand it, into certain categories, recognizing what belongs to this category, what belongs to that. In our twentieth century culture, at any rate in the West, the only way to slice the orange is into crosswise categories. That is "scientific". If we attack every orange that way, we may come to believe that nobody can tell us anything new about the inside of oranges, and dismiss anyone who suggests it might be done differently as a crank. Or even worse than a crank, if he has the nerve to imply that his method is more in keeping with the structure of the orange, so you don't lose your juice.

However, astrology is about learning to think in new categories. It embodies a systems of categories that are as different from the ones to which we are habituated. ... In this system objects and events that at first sight appear to have nothing whatever to do with each other are shown to be intimately connected. Conversely, things we naturally tend to associate may be distributed otherwise in the astrological scheme.

Heart of the Matter

Clearly, this wide-ranging definition of astrology as a complete alternative system of categories is far removed from the popular conceptions of what it is about. Nevertheless, it goes straight to the heart of the matter. The Idea that astrology is not an add-on to the universe we know but implies a differently structured universe, has always been recognized by those whose interest in the subject has been other than superficial. In a booklet entitled Some Objections to Astrology Stated and Answered, Charles Jane wrote:

The planets with which the astrologer deals are not, in point of fact, the physical orbs that we see. But rather are great categories of existence, animate and inanimate, operating upon all the planes of being throughout the solar system. Of these many are in and around us. The physical planet is, so to speak, the focusing point and the symbol of its category.

The concept of the physical planet as the focus of a diffused category to which it itself belongs has an interesting history. Astrologers have often been taken to task for failing to allow for the varying distances of the earth from other bodies in the solar system. It is argued that the remote planets cannot act with the same power as a near body like the moon, and that the neglect of such an important factor makes nonsense of astrology's claims. But this was not a problem for an earlier, more holistic view of the universe. Whereas Saturn means for modern astronomy the body in orbit around the sun, at one time this name or its equivalents were used in another sense. Saturn was not just the planet, but the whole area or sphere enclosed by the planet's orbit – what today we might call a field. Everything within the boundary described by the path of this planet was interpenetrated by a Saturn force, of which the body shining in the night sky was a focus or densification, rather as the earth's magnetic field is intensified at the pole.

For the earliest astrophilosophers, then, Saturn, Jupiter and so forth were not only 'there' but 'here', and man lived within the supersensible bodies of the planets just as he lives within the earth's atmosphere. So it was unnecessary to visualize mysterious rays impinging on the earth across the distances of space. For pre-Copernican thinking the idea was perfectly feasible because the earth, center of the planetary system, was the hub of a number of concentric spheres, each sphere, in the imagery of Dante, bearing its planet like a jewel upon its back. Originally this cosmology may not have been simply a mechanical device to explain the movements of the planets, but a recognition of the extended spatial nature of the forces identified with them.

This essay was excerpted from Dennis Elwell's book Cosmic Loom.

Dennis Elwell was a British astrologer, journalist, and lecturer. Mr. Elwell passed in November 2014. As a teenager he taught himself the basics of astrology and, at age 19, he had an article on reincarnation published in the magazine Prediction. He also has contributed articles to the Astrological Association Journal, The Future of Astrology, American Astrology and Mountain Astrologer. His book Cosmic Loom is considered a classic by many astrologers.