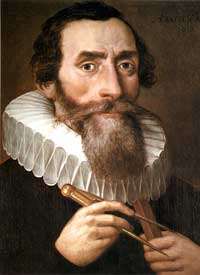 Throughout his troubled life, Kepler sought for a Pythagorean unity between Astronomy and Astrology. He invented three new astrological aspects just as he discovered three laws of planetary motion. Both of these, he would have said, were a part of his quest for the Harmonices Mundi - the title of his magnum opus which he published in 1618 - just as the Thirty Years' War was breaking out in Germany.

Like his great colleague and predecessor Tycho Brahe, Kepler was able to predict, using astrology. His yearly weather-predictions in his Calendars enjoyed quite a reputation for being spot-on, and his biographer tells us about a prediction he made concerning a storm in Prague, and how it arrived on cue, impressing the locals. Even today we cannot avoid a sense of awe over his 1618 Calendar, when he in effect warned of the outbreak of the 30 years' war in May, a month which he wrote would 'bring great upheavals to the world.' His prediction of the war-outbreak centred around a Sun-Mars conjunction in Aries that March, he explained, somewhat belying claims he made not to have used the zodiac. ('Mundane astrology doesn't get any better than this,' Nick Campion said to me.) In practice Kepler did his astrology in German, whereas his more 'intellectual' comments on the subject in Latin are consistently more skeptical. Asked to make predictions for Count Wallenstein based on his natal chart, he wrote out a text which looked ahead through the years, and terminated on what was to be the month of his death, with some warnings given about that month.

Kepler and Galileo appear in history as representing the last of a profession the mathematicus, that was triune in its essence: mathematician, astronomer and astrologer. Kepler's first duty was to give guidance and advice to his patron, the Emperor Rudolf II, based upon his natal chart. Kepler's great reform of astronomy was achieved using the orbit of Mars, and published as his Astronomia Nova of 1609: its preface discussed Mars in Rudolf's natal chart and expressed good wishes concerning the Mars-energy of the Emperor. Kepler was the first to understand that the well-known Fibonacci series converged towards the Golden Ratio (1610) - but, he also linked that phi-ratio to his 'quintile' aspect via the pentagram, then he linked that to the fivefold pattern in flowers. He was what would now be called an 'holistic thinker'.

Kepler published his Mysterium Cosmographicum 1595, a Pythagorean work which helped to hold together Kepler's astronomy and astrology: the Platonic solids, which he rather strangely fitted in between the six planetary orbits - and they fitted fairly well - had angles which he felt helped him to account for the working of planetary aspects.

He spent a Jupiter-cycle of twelve years in his beloved Prague, where his most important creative work was accomplished. He was summoned there by the moody Dane, Tycho Brahe, Imperial Mathematician for Rudolf II. The two of them shared a belief in astrology, however Brahe never believed that the Earth moved, so there was always that dreadful stress of disagreement between them. Brahe died, rather providentially,1 and Kepler became Imperial mathematician and composed in Latin his De Fundamentis Astrogiae Certioribus on the more certain fundamentals of astrology in 1601, over his Saturn-return. It is the first Gaia theory, about how Earth as a living being responded to geometrical patterns in the heavens, using a musical type of theory. It endeavoured to predict such matters as quality of wine, political stability, harvest and weather, discussing such things as how eclipses could disturb the subtle energy of the Earth, and how quintiles could affect snowfall.

There was an empirical slant to his astrology, he averred. As the first astrologer to invent new celestial aspects, mainly the quintile (the one-fifth angle) and bi-quintile, he claimed to find the evidence for this in terms of weather effects; and found reasons for them in terms of musical ratio, because dividing a string in a 4:1 and 2:3 ratios made harmonious and pleasing sounds: whereas no one-seventh aspect could exist, he insisted, as this was neither musically pleasing nor constructible on paper, so the 'septile' aspect could not work.2 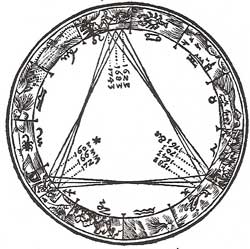 A theory of history appeared in 1606 with Kepler's De Stella Nova based upon the eight-century motion of the Jupiter-Saturn conjunctions as moving through the zodiac elements. This reached back to the birth of Christ in the 6th year BC - a revamp of the Arabic chronocrators which measured out the cycles of historical time - but more complicated because Mars had also appeared conjunct the big 1604 conjunction, and Kepler wanted to find times at which that triple conjunction recurred. Everyone wanted to know what the conjunction meant, and, whereas Brahe had not hesitated to predict a new golden age, Kepler was more circumspect.

His Tertius Interveniens 'Third man in the middle'(1610) was an impassioned plea to astronomers not to throw out the 'baby with the bathwater' in rejecting the essential kernel of truth in astrology. There, he crossed swords with the great skeptic Pico Della Mirandola two centuries earlier, defending what he saw as essential. He called himself a 'Lutheran' astrologer, trying to reform it. 'When a human being's life is first ignited,' Kepler explained, 'when he now has his own life, and can no longer remain in the womb -- then he receives a character and an imprint of all the celestial configurations (or the images of the rays intersecting on earth), and retains them unto his grave'.

In 1618 his grand synthesis Harmonices Mundi integrated geometry, arithmetic, music astronomy and astrology - basically the Mediaeval Quadrivium, but seeking for a new, sun-centred harmony.3 His comments there given about how and to what extent astrology 'works' may not yet have been improved upon. The fourth book concerned the manner in which astrological aspects worked, and which ones did so, which strongly and which only weakly. It followed on from his earlier arguments about musical theory and geometrical form. Scientists have grudgingly had to read this work - although they don't like celestial harmony - because it contained his grand statement of the 3rd planetary law in its fifth 'book.'

When Kepler examined his natal chart, he could not from our point of view see very much: just a Sun-Saturn sextile and maybe also his Moon conjunct Aldebaran - but not his Neptune rising, nor his Sun conjunct Uranus. He saw two quintiles, whereas his chart actually had a rather distinctive triangle woven of five of these new aspects (i.e., a golden-ratio triangle). He saw himself as a Saturnine type, and died on his second Saturn-return. Leibniz described him as 'that incomparable man, whom the fates had watched over that he might be the first among mortals to publish the laws of the heavens, the truth of things and the principles of the gods.'

1 Brahe had an ultra-short spell as Imperial Mathematician at Prague from 1599-1601, despite which one should not endorse the thesis of the bestselling book Heavenly Intrigue by Guilder and Guilder 2004 that Kepler might have been involved in his demise.

2 Musically, the one-seventh interval first started to be used by Chicago Dixieland jazz in the 1920s.

3 Kepler's The Harmony of the World 1997 American Philosophical Society translated by Aiton, Duncan and Field appears to be still in print.